Feeding ourselves: Vegan food, art, and all the treats 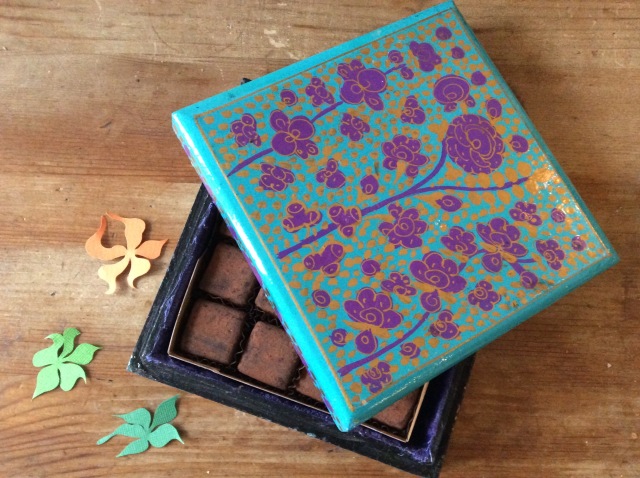 It’s been quite an up and down week. I’ve been feeling quite tired and grumpy, and like I’m not really ready to go back to work tomorrow. I’m feeling better now, but was feeling pretty grim at the beginning of the week, and have been thinking about what has happened between now and then to improve things. It’s has led me to reflect a bit on the things we can do (or not do) to look after our selves when things begin to feel a bit stressful.

The main things that have been helpful have been focused around feeding the creative bits of me. To start with we went to see exhibitions of work by both Robert Rauschenberg and the William Kentridge. I found both exhibitions interesting and though provoking, but the exhibition by William Kentridge was particularly inspiring for me. This is because he used lots of film, narratives and animation in his work, which are also things that I like to play with. He has talked about using a ‘stone age’ approach to film making, and many of the pieces in the exhibition used these techniques, with beautiful effect. From a technical point of view there was little in his work that I probably couldn’t have a go at myself with enough time and effort. Seeing that kind of work on a large scale has been a trigger for me to think more widely about my own practice and where that could go.

We’ve also been out for several good length walks, one through the centre of London and one through some local woods. I tend to find my thinking is most productive when walking about, there is something about the rhythm of walking that works for me. A walk in the woods can really help me work through the kinks in an old idea, or snatch hold of and develop a new one, so this was a helpful thing to do.

Finally we’ve both been paying a lot more attention to what we put in our bodies, as we are a week into Veganuary at the magpie nest. We have had one vegan fail, but as this is time of learning for us I think it’s ok. One of the brands of gluten free bread we’ve used for some time uses egg as a binding agent and we didn’t think to check the label until we were half way through the loaf. What we have found is that we are having to think more creatively about what we cook, as a number of our ‘go-to’ meals are animal-product heavy. In putting limits on what we can cook, we are exercising our creativity in this way too, which is fun and an unexpected benefit.

Finally, we’ve also been indulging in some vegan treats. My boyfriend bought me a box of these chocolates from Booja Booja for Christmas, which are dairy free and particularly yummy. They have quite an intense chocolate flavour and I find one or two are satisfying enough so while they are on the pricy side, you can eek them out a bit. They come in a really beautiful hand painted box (see the picture above) which is particularly appealing to my arty/crafty creative side. I have been enjoying them anyway.