On finishing things, or, I made a thing, eep!

When I started writing blog posts about the connection between creativity and mental wellbeing I initially thought that I would write one, let it loose, see how it flew. Then I had an idea for another one, but I thought I would run out of steam on this thought stream pretty quickly, but then had another idea, and then another. So far each little thought seems to lead to another little thought, that is just enough of an idea to write a blog post about. Go figure.

Most of the things I blog about in this ‘series’ are just my ideas about theories that I know of and that I find useful in making sense of myself, and of my experiences. If working as a researcher in psychology and medicine and mental health for the last 12 years has taught me anything it is this: there are many splendid varieties of ‘human’. What works for one person will not work for the next, or will work but in combination with a third thing. For many people it is possible to manage their wellbeing through a healthy diet, a decent amount of exercise and a little enjoyable down time. It doesn’t seem to be quite enough for me, there needs to be something….else.

One of my blocks over the last few years has been in finishing things. I don’t know if this is a typical ‘scanner problem’ but I am pretty good at getting dug into a project, and then, about half way through there seems to be another project that I need to start, so I do. And then another. And another. The banner picture on my blog at the moment is a blanket I made for my sister. It took a whopping 7 years to finish that baby off. 7 years. And I was so proud of it that I took pictures of it before I handed it over to use on the banner of this blog. So in contrast to that, this little guy in the picture above only took around six months. And look, he lights up… 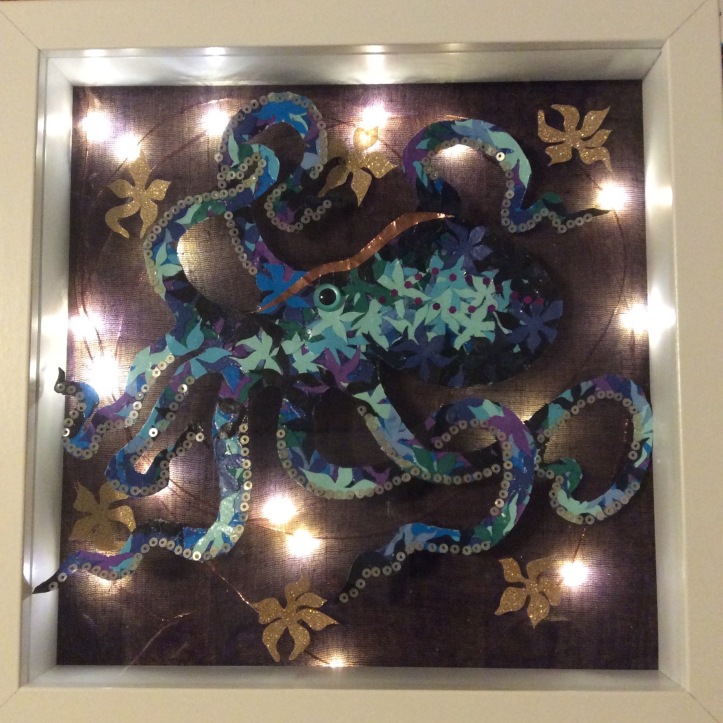 Many of my ongoing projects are quite ambitious, there is a play, a film and a novel, and now a book about art and wellbeing. I’ve struggled to get close to finishing any of these things and this was beginning to cause lots of creative angst. One of the strategies I’ve come across in the mental health world, and in the online world of inspirational businesses, is the idea of goal setting. Of particular use to me has been setting smaller goals, by which I mean developing much smaller projects that are I could potentially finish in a few weeks (it still takes a few months but never mind). I’m finding that in actually finishing some things I feel much more motivated to return to those more ambitious, difficult projects, and I feel better for it. It’s helping, that the play is actually looking in good shape to send somewhere soon.