OK day 2 of the quote challenge. I was nominated by the lovely Laurie from the lovely blog Meditations in Motion. As well as blogging brilliantly about range of things, including running, she also wrote this lovely post about her mother’s ring as one of her ‘objects with meaning’. Well worth a trip over there to have a read, that’s all I’m saying.

So here are the rules:

So here’s my quote for today. It’s from a book called ‘Letting stories breathe: a Socio-narratology’ by Arthur Frank.

‘The all too human dilemma is that by accepting being a story, a person at least provisionally accepts being what the story casts him or her to be, it’s interpretation’

So I think this is probably a geeky choice for a quote, but I really like it. I have been working on a documentary about someone for quite some time and this is one of the things I am troubled by, as I try to get anywhere near finishing it. I am telling someone else story – the finished result will necessarily be my construction or interpretation of what happened. That’s quite a big responsibility if the aim is for other people to see it, which it is. so I have been thinking on this for quite some time.

A few weeks ago I started running a series of posts about ‘objects with meaning’, by which I meant objects that have personal importance to us, so that they may make up part of our emotional story or landscape. You can read that original post here should you want to know more. You can also have a look at some of the objects here and here.

Anyway, I found that something pretty exciting had happened at the beginning of this week when writer Scar (of blog SCAR) took up the idea behind this post and wrote her own lovely post about her own poignant ‘objects of meaning’. You can read her post here. I was particularly taken with the tale of her Ukulele and of her Happy Wagon. No spoilers – if you want to know more you’ll need to head over there to get the full story. If you like books, or ever have occasion to roam London looking for good places to hang out or eat, her blog is also for you.

So I really like the idea that other bloggers may want to write about their own ‘objects of meaning’ and the stories behind them. I think ideas are best shared. If you would like to join in I would be happy to host guest posts here, or link to posts on other blogs to direct some traffic. I really like the idea that we could together develop a web or map of stories through interesting objects, nearly forgotton pieces of clothing and long cherished toys – it would be exciting to act as a hub for that.

Please grab my attention by posting in the comments below, or you can email me at rose@magpieatmidnight.co.uk if you would prefer that.

I also make art. You can things with my designs on at my shop here. Could even treat yourself if you wanted to. Just saying. 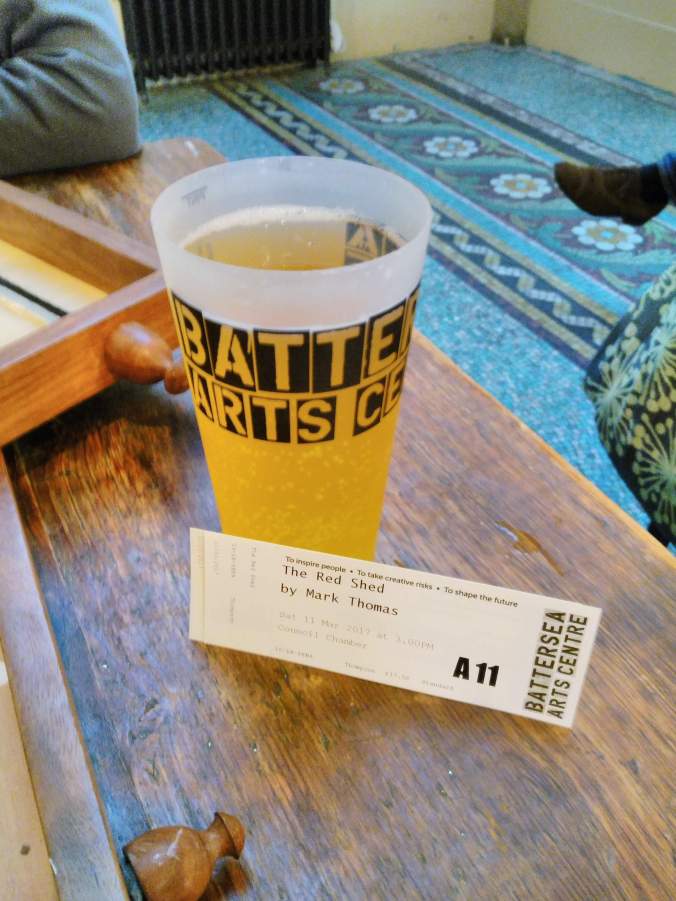 Yesterday we went to see The Red Shed by Mark Thomas as Battersea Arts Centre. We go there on a fairly regular basis. We’ve only started going since a fire consumed the roof of their great hall. They are currently undergoing a painstaking restoration of the great hall, and each time we go it seems there is a little more progress, a little more of the building revealed, which in itself is quite exciting. Because of the fire, we have always seen shows in the much smaller council chamber upstairs, which is small and intimate, and possibly my favourite place to see new writing in London.

Yesterday we were seated right in the front row and so were less then five meters from Mark Thomas as he performed The Red Shed. I loved it. You should see it. I’ll say that upfront. He delivered the story of his relationship with a building known as ‘The Red Shed’, a socialist club in Wakefield. He drew on his own personal history of activism to tell the story of the Red Shed and the people who go there. A winding narrative that took a tour through his activism during miners strike in the North of England. Effectively, he gave a one man performance, but he also bought 6 members of the audience to sit on stage and had them hold up a series faces made of board to invoke different characters through the show. I really like this very stripped down form of storytelling, where the narrative is allowed to do most of the work.

Through out the piece he spoke about the importance of stories. That stories are important in allowing us to remember our history, and so understand who we are. The stories that are told about us can come to define who we are, we may come to live within those stories and that they may come to direct what we do in the future. For this reason it important that the stories we tell about people are true. He made an important point about how the stories about the working class in Britain are frequently told badly or incorrectly, over simplistically, or simply not told at all. Politically this has had great and damaging impact on the working class in the UK. The realities of their lives, their needs and anxieties have been ignored, lost, misunderstood and ultimately somehow seen as irrelevant by many of us. By failing to make space for these stories, and by failing to recognise them as important, we have failed understand, and have failed to see the people and communities behind them as important.

After the show he was in the foyer signing books and I wanted to speak with him but couldn’t quite arrange my thoughts to do so. I was quite upset coming out of the performance. Much of of what he said resonated strongly with me and I wish I could sit and talk with him about this. Some of the documentary and playwriting work I am trying to do is around mental health and disability. These are complicated stories that are frequently seen in the news in only their most simplistic and ‘tragic’ form. My starting point now I think is to try to work with the people whose story I am interested in, so that we tell the story together, rather than have me tell their story for them. I’m not quite sure how I’ll pull this off, yet.

Stories have an emotional truth. We believe or don’t believe them based on whether we feel they are true, so if something feels true it is easy to slip a few lies through with that feeling. In fact it is possible to cynically slip through a lot of lies if you can attach them to an existing feeling, which can have awful consequences. A lot of the racist propaganda emerging from the leave campaign for Brexit last year did just this, and now we have racist hate crimes on the rise. This is why it is important when tell stories about real people, that we make sure what is in those stories is true.